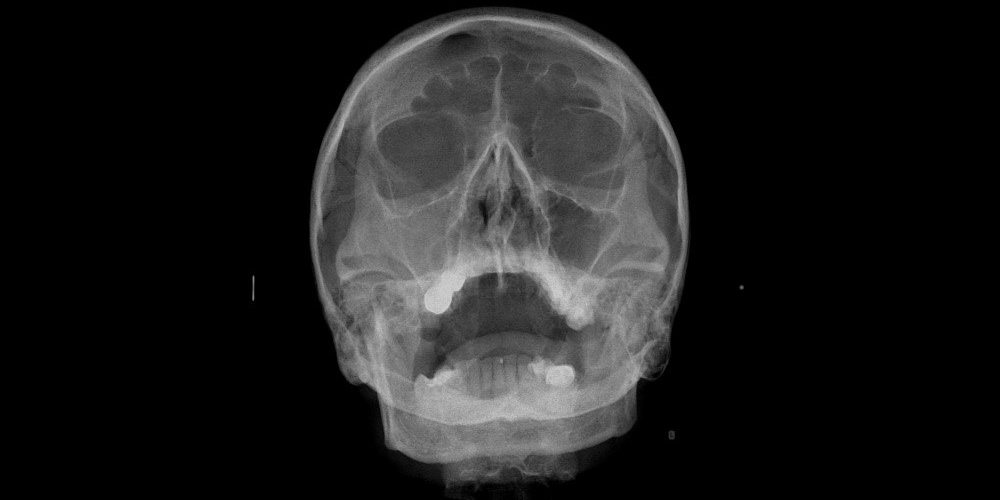 Odontogenic Sinusitis Caused by A Radicular Cyst After Removal of Upper Second Molar: A Case Report

Maxillary sinusitis may have many causes. It is usually caused by upper airways infections and inflammations and rarer by odontogenic infections.

We report a case of a 43-year old woman with odontogenic sinusitis caused by residual cyst after removal of upper second molar.

After a 13-day antibiotic regimen was administered she was sent to our clinic and followed by a surgical removal of the cyst and 10 more days of antibiotics (tablets and sprays). Complete recovery was achieved by the fourth week.

Sinusitis is the inflammation of the mucosal lining of the paranasal sinuses caused mostly by allergies or respiratory infections. Less frequently, other conditions such as odontogenic infections may be associated with sinus alterations[1].Maxillary dental infections have been known to cause sinusitis for over 100 years[2] and recently published data show that the number of cases seems to have increased over the last decades[3].

Computed tomography (CT) and cone-beam CT (CBCT) are the most reliable tools for the evaluation of structures within and those adjacent to the maxillary sinuses, mainly due to the fact that these techniques allow tridimensional imaging and, in some cases, evaluation of the soft tissues[4-7].

Historically, 10-12% of maxillary sinusitis (MS) cases have been attributed to odontogenic infections[8-11]. However, in recent publications, up to 30-40% of chronic maxillary sinusitis cases contributes to dental cause[2]. It occurs when sinus membrane is violated by conditions such as infections of the maxillary posterior teeth, pathologic lesions of the jaws and teeth,maxillary (dental) trauma, or by iatrogenic causes such as dental and implant surgery complications and maxillofacial surgery procedures[8,9].

This disease differs in its pathophysiology, microbiology, diagnostics and anagement from sinusitis of other causes, although clinical symptoms are not conspicious. Therefore, incorrectly diagnosed, it leads to failure of medical and surgical treatment directed toward sinusitis[2,12].

In terms of clinical symptoms, many patients with odontogenic sinusitis do not refer upper teeth pain[13]. The most common symptoms are nasal obstruction, facial pain, headache, snoring, acute sinus perforation and swelling[14]. Also, odontogenic sinusitis can manifest in the form of nasal congestion or discharge, facial pressure, anosmia and cacosmia[13,3]. The patient may have a dental infection or have undergone previous oral surgery[8].

Odontogenic sinusitis can be resolved by just treating the dental cause (endodontic treatment, cystectomy, etc.)[3]. However, when symptoms are acute, antibiotic treatment is necessary[13,15]. Saline nasal sprays and decongestants may be necessary[15].

A 43-year old woman was presented in our clinic with purulent nasal secretion and constant dull pain in the infraorbital region, eye and head on the right side.

An extraction of upper second molar was performed 20 days prior from her family dentist. 3 days later after the extraction the symptoms mentioned above occurred. A 13-day antibiotic regimen was administered with amoxicillin-clavulanic acid (Augmentin 1gr).

During the examination a palpatory pain was found in canine fossa, infraorbital region, zygomatic crest, maxillary tuberosity (right side) and pulsating pain in teeth on the same side. After an intraoral examination, an extraction wound of the upper second molar was noticed.

The following treatment was executed: after application of local anesthesia a revision and debridement of the socket was performed. The residual cyst was removed and confirmed histologically. The communication was opened and the purulent secretion was evacuated. The sinus of the patient was rinsed 3 times a week with and additional antibiotic therapy including: Levofloxacin 500 mg/12h for 5 days followed by 500 mg/24h for 7 days; Metronidazole 500 mg /12h for 5 days; Ibuprofen-pseudoephedrine 800 mg every day for 10 days; Xyzal 5 mg taken at night for 10 days; Vibrocil (nasal drops) and Nasonex (nasal spray).

On the 3rd day of the treatment the symptoms improved drastically, on the 5th day the patient was asymptomatic and after 2 weeks the communication between the oral cavity and the sinus cavity spontaneously healed which lead to discontinuation of the rinses.

The most common cause of odontogenic sinusitis is iatrogenic (55.97%). Other possible etiologies are periapical periodontitis (40.38%) and odontogenic cysts (6.66%). Oroantral fistulas and the remaining roots, taken together as iatrogenia after tooth extraction, accounted for 47.56% within iatrogenic causes. The dressings to close these oroantral fistulas and non-specific foreign bodies for the 19.72%, extrusion of endodontic obturation materials into the maxillary sinus represented the 22.27%, amalgam remains after apicoectomies the 5.33%, the maxillary sinus lift preimplantology surgery 4.17%, and poorly positioned dental implants or those migrated to the maxillary sinus the 0.92% of all cases included under a iatrogenic source[10].

It is very important to diagnose the odontogenic origin of maxillary sinusitises, since only the management of the odontogenic cause can lead to the resolution of the infection and avoid recurrence[16].

Most authors use 3D imaging to find the aethiological cause of maxillary sinusitises[15-18]. In a survey conducted among otolaryngologists, CT scanning was the preferred imaging technique for the diagnosis of odontogenic maxillary sinusitis[19]. Before any kind of sinus surgery it is very important the sistematic study of radiographic anatomy of maxillary sinus. In this sense, the patient´s CT-scan already showed a bony coating around the cystic lesion, so we should have suspected a bone lesion but it went unnoticed[20].

Among odontogenic cysts, radicular cysts  have been indicated to represent 54.6% in a literature review by Johnson et al[21].Ramachandran Nair et al[22] showed that out of 256 periapical lesions, a total of 39 (15%) were classified as apical cysts after microscopic examination using serial sectioning.

In cases of odontogenic sinusitis, thorough examination and correct diagnosis is crucial. Before an extraction is performed it is important to diagnose if there is any periapical pathology.

We have 121 guests and no members online